One of the really nice things about an extended at-home vacation is that Hanna and I can eat on our own schedule, which for both of us is more along the brunch-at-ten-late-lunch-at-four-cocoa-before-bed than breakfast at seven, lunch at noon, and dinner at six. 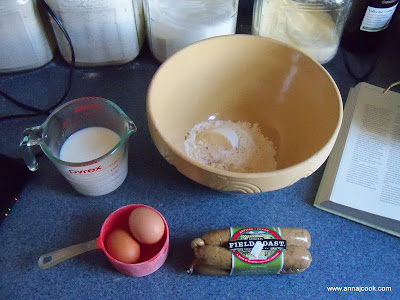 Hanna's parents gave us Rose Elliot's New Complete Vegetarian for Christmas and we've made some lovely and simple recipes from it, like the oatcakes and most recently vegetarian toad-in-a-hole. Toad-in-a-Hole is basically a baked pancake with sausage in, and very simple to make! Elliot's version is as follows:

2. Brown vegetarian sausages (we used the Field Roast apple & sage, but any kind would work!) in 1/4 cup of oil (we used olive, but any nut or vegetable oil would work) in a cast iron skillet, remove from the pan and set aside. Leave the remaining oil in the pan for later use.

3. In a mixing bowl or blender, combine:

Beat until smooth and put in a pitcher (I used a Pyrex measure) or leave in blender for easy pouring.

4. Put skillet with oil into heated oven and let warm until the oil is very hot and just starting to smoke.

5. Pull out the oven rack and pour the batter directly into the pre-heated skillet. Drop the sausages into the pan, distributed as evenly as possible, and close the oven door as quick as you can.

6. Bake for approximately 25 minutes (don't open the door to peek!). Check after 25 minutes and once the top of the pancake is golden brown remove from the oven and serve immediately. 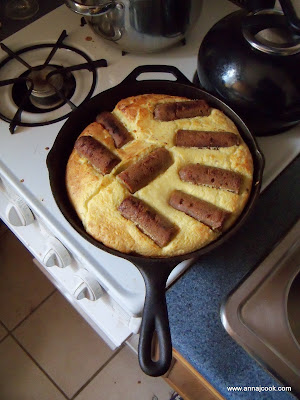 It was just the sort of meal we needed prior to going out on a brisk walk yesterday afternoon to the Chestnut Hill Reservoir and back.

This morning, Christmas Eve, we're having coffee and cinnamon buns while listening to the MPBN broadcast of the Festival of Nine Lessons and Carols from King's College, Cambridge. The buns are inspired by our favorite recipe of Joy the Baker's, her sugar and spice yeast rolls. But this time I did make a few changes that Hanna and I agreed were


In other news, we're forecast to have a couple of inches of snow overnight and into the morning hours of Christmas Day, so hopefully Hanna will have the white Christmas she's yearning for! 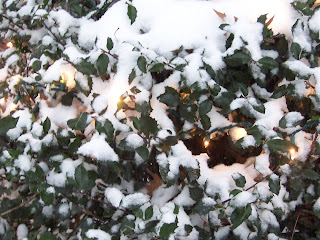 Cross-posted at the feminist librarian.
Posted by annajcook at 7:51 AM No comments: